Mapping the Conflict: Debates in the Design Academy Eindhoven 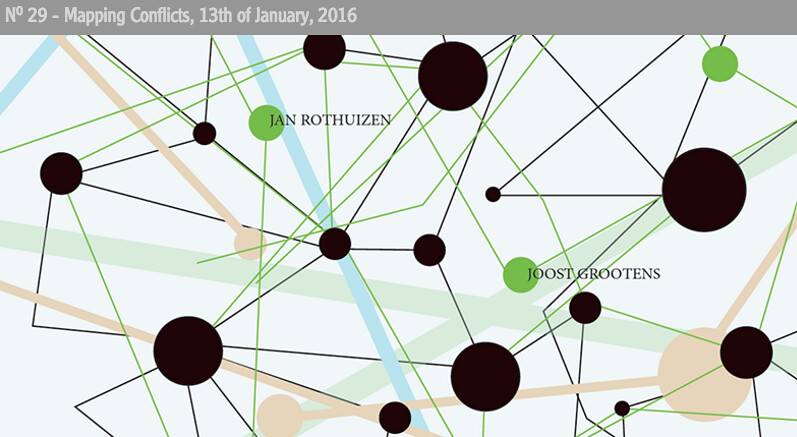 Last Wednesday I went to the Design Academy Eindhoven to participate in what is known ‘design debates‘, open gatherings where they invite various speakers and where the students (as well as other participants) can discuss certain issues (more or less related to design).

This time the topic was about ‘mapping’, and I am always keen to learn on almost everything in this filed. This passion has been seemingly shared by many more, as the event was absolutely totally full, I’ve been to a few debates in the past, but this was nothing compared to the one on maps. The picture below shows the room a quarter of hour before the event began, and by the start it was completely full. 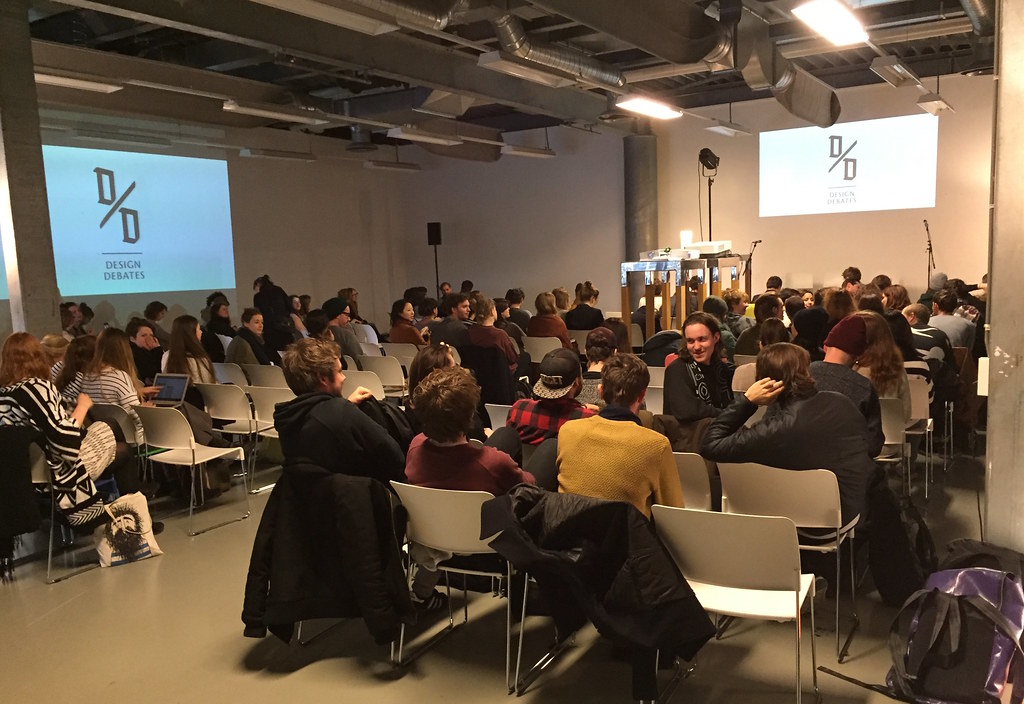 More on the settings and the stories: 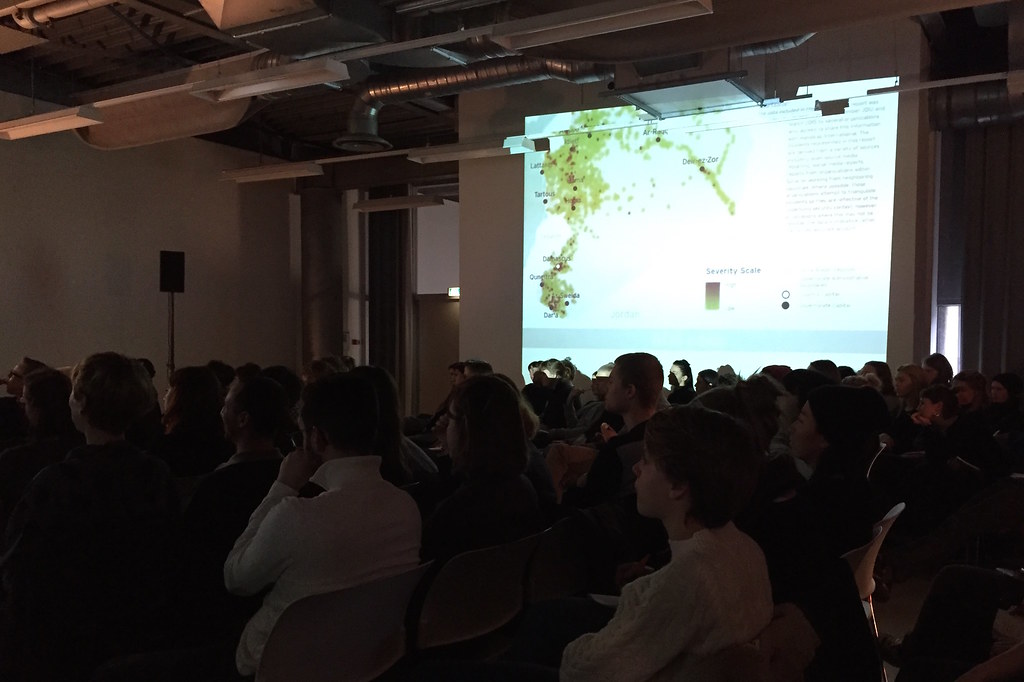 The event was opened by David Hamers, a lecturer at the DAE and (as I figured later) Daniëlle Arets, also a reader in the Academy and a person more or less in charge of these design debates. 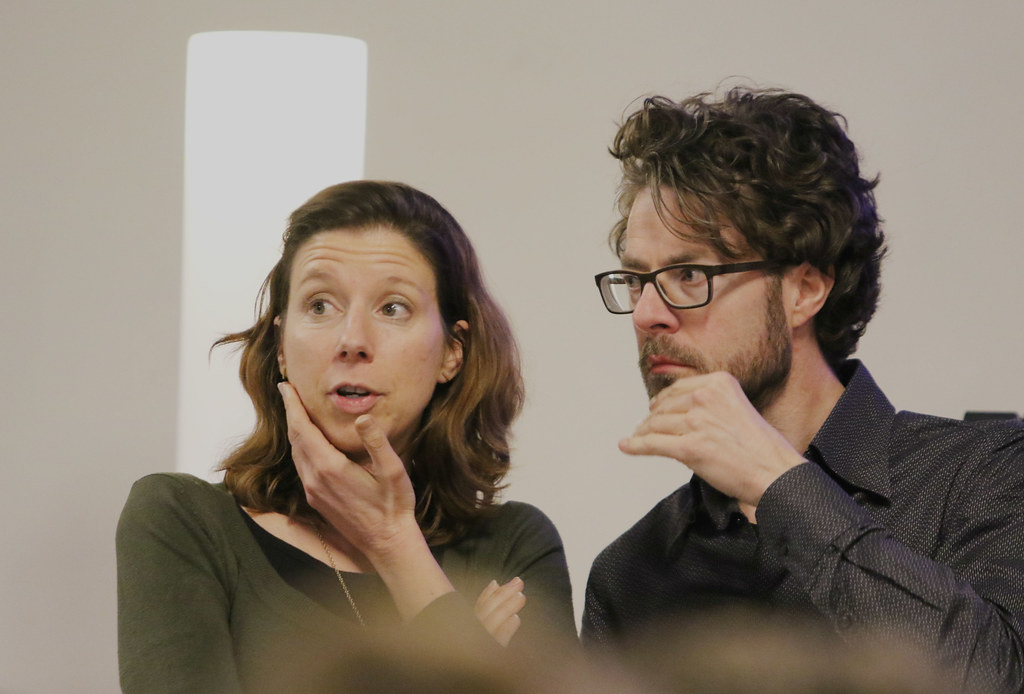 David started the event with an overview of current affairs with ‘map & mapping’, in particular in the context of design. He more or less reiterated the description of the debates from the website:

“What is the role of maps and the activity of mapping in a world that is more and more dealing with conflicts? How can maps help us to get a better understanding and is mapping in itself a political activity? Furthermore, technological developments also make it more difficult to achieve a single and dominant viewpoint. Information travels fast and there are plenty of advanced techniques available for the creation and manipulation of maps. Maps themselves have also become more flexible. They’re in our minds, in the car, on our mobile phone. What is the role of maps and mapping in a world that is facing conflicts?”

He also presented a few examples – from the omnipresent map tools on our smart phones: 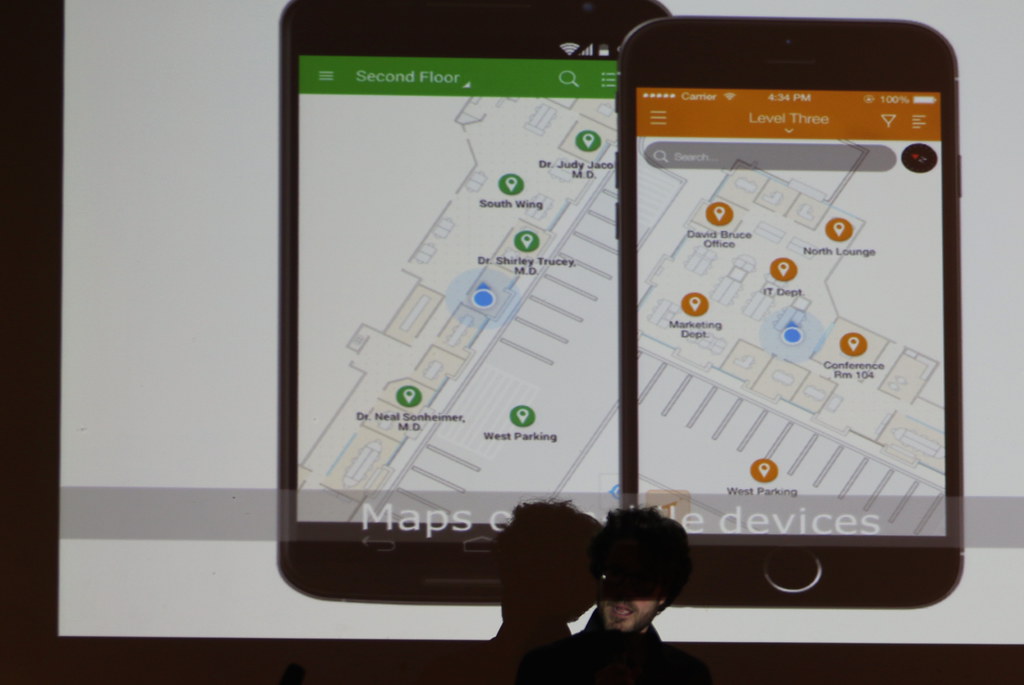 o a more artistic reinterpretations, such as the project Citymusic by Akko Goldenbeld (also a graduate from DAE). Akko made a 3D map of Eindhoven and converted it into a music roll for player piano, thus making the map a soundscape of the city (pretty bizarre, I should add). The project is from 2011, and it made quite a splash in the media by then. 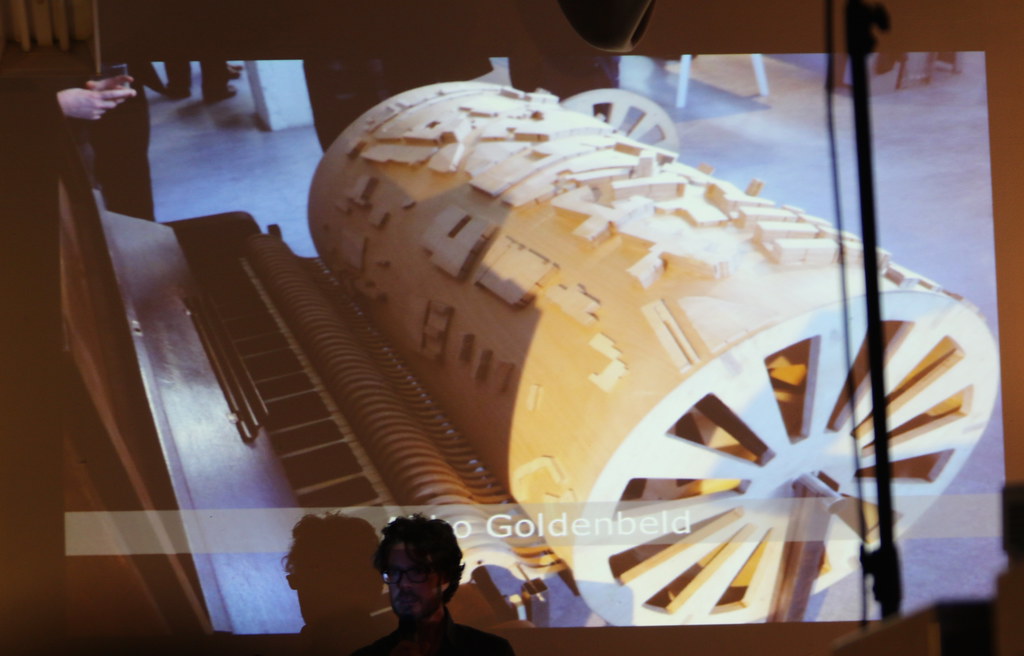 Few other presented ‘maps’ were of less extravaganza, but still are more or less design exercises (and quite far from any ‘conflicts’).

A series of bracelets from 133.11 Lifestyle studio depict the maps of various cities (you can see more on their website): 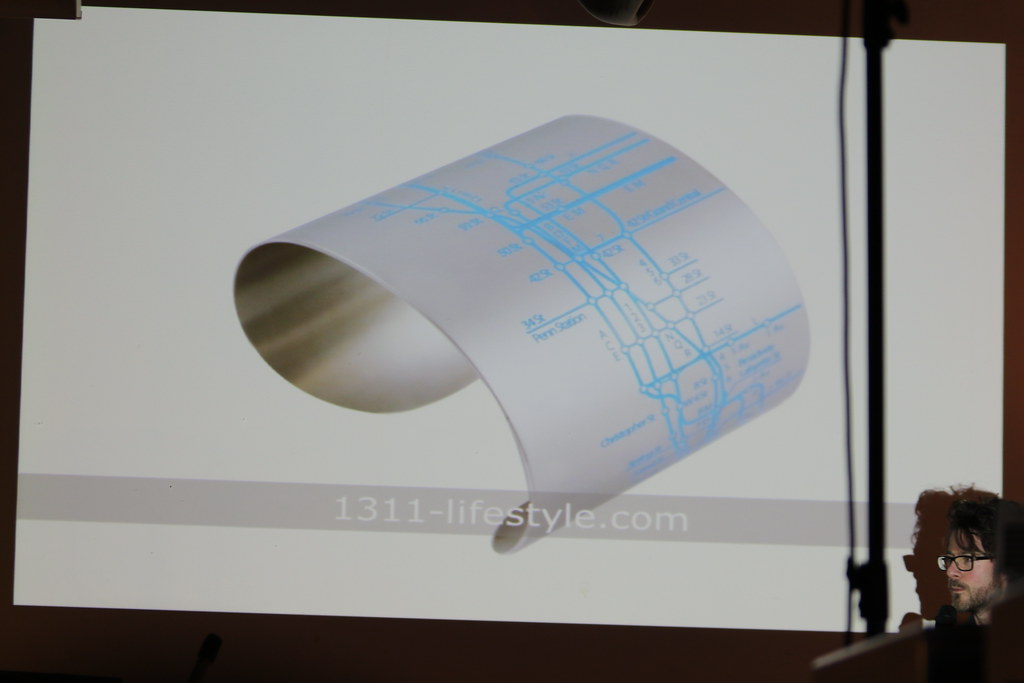 … and the bowl by Frederik Roije is made in form of the Amsterdam maps. 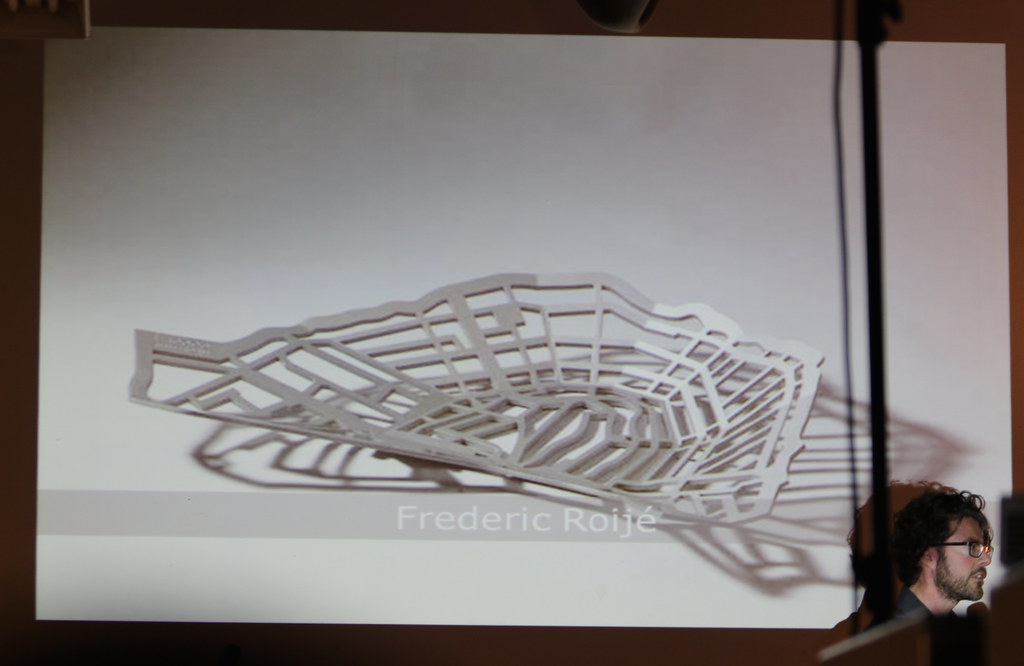 These are interesting exampels, but interesting in the same way as any kitsch is interesting: a second of wow, and then one hops to another item.

I didn’t find the exact project presented at this slide – it looks like a giant Mercator’s map on a ceiling of public building (train station?) Again, nice but not more than ‘nice’, because the next question will be ‘So what?” 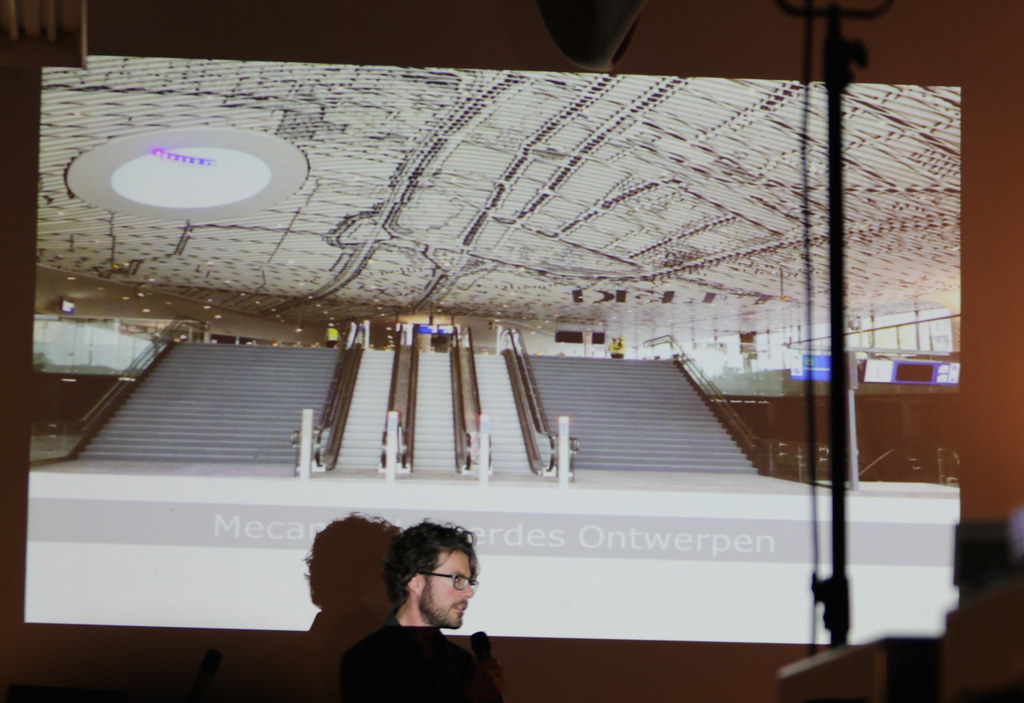 PS: I later have learned that it’s the project by Mecanoo, of interior design for the train station in Delft.

After his short intro David gave floor to the four invited speakers. The first was Leeke Reinders, researcher of urban life who is using maps to both capture his finding but also to pose new interesting questions and probe new issues. 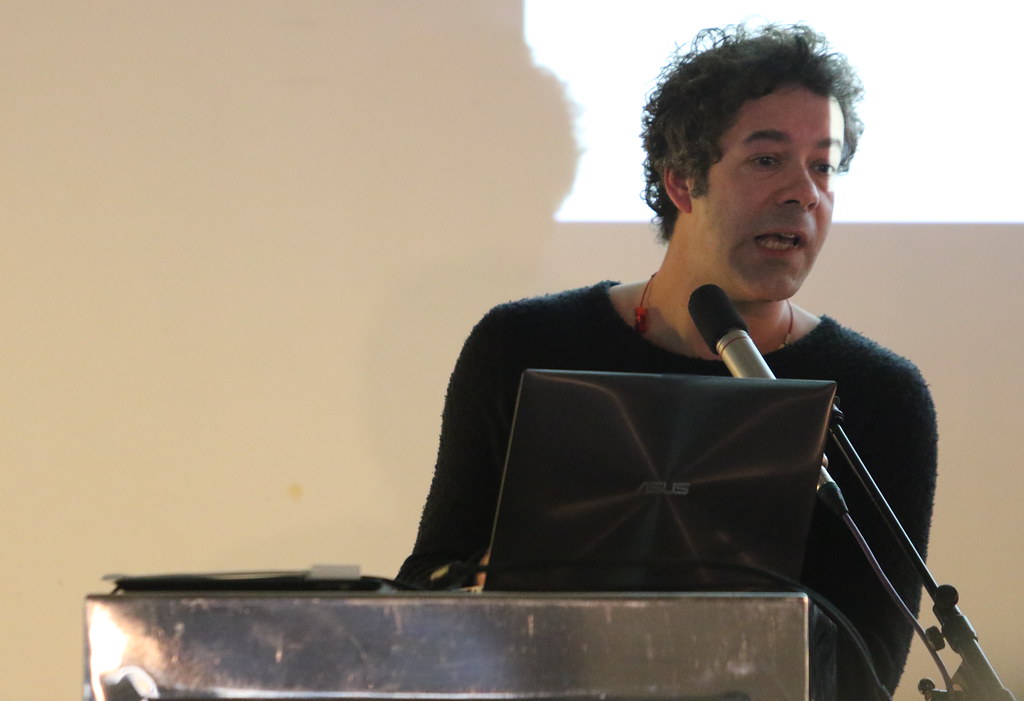 Leeke has wrote an interesting book in 2011, De verbeelding van een nieuwe staat (unfortunately, it’s still only in Dutch). The title literally means ‘Imagining new city’, but in Dutch verbeelding has much stronger association with the word ‘beeld, a picture then the English ‘imagination’.

Leeke told about his use of maps as a way to capture the subjective, experiential side of urban life (it is of course a very known tool in psychology, of mental mapping the experience).

But he also had a very interesting angle in his presentation (that had a title ‘Mapping and the lost art of getting lost’). Leeke spoke about the practices of ‘getting lost’ in the city – surprisingly, more and more difficult to achieve in our increasingly efficient and transparent world (‘our world’ here refers mostly to the cocoon of the so called ‘first world’, of modern megapolis.

The second presentation was by Jan Rothuizen, Dutch artist and illustrator. 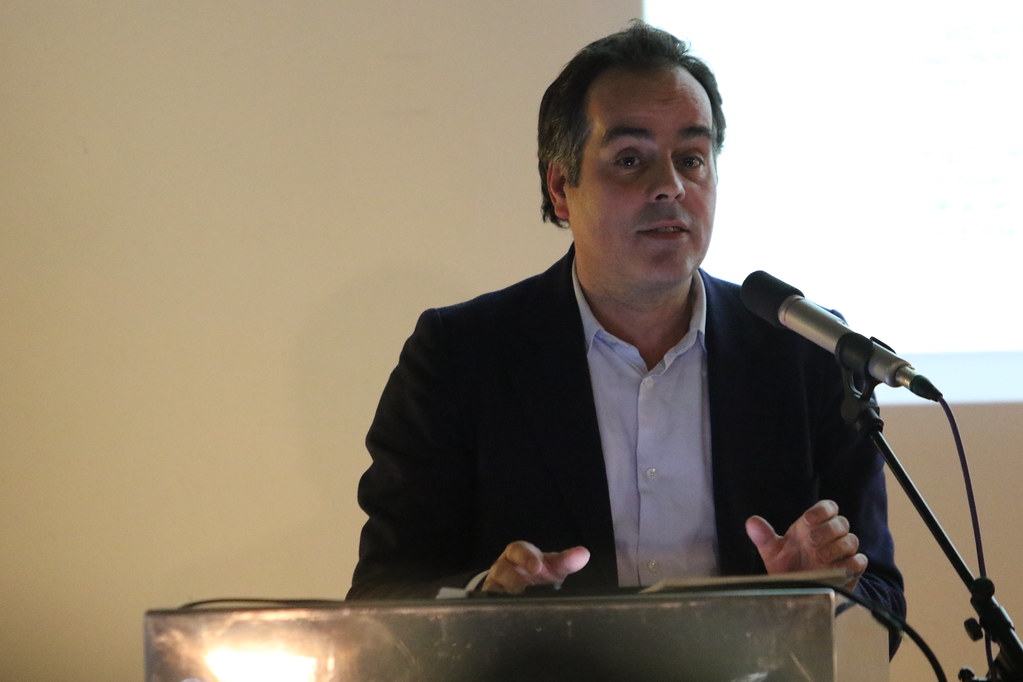 In fact, I knew about his works, I even have one of his books, so called De Zachte Atlast van Nederland

It is a very interesting exercise, a hybrid of maps and story-telling. These are not really ‘maps’, more like subjective representations of spaces and places (although they may bear some resembles to the ‘actual’ territories).

The first project Jan told about was his not so well-known project (I didn’t even find its traces on his website), about a center of detention of illegal migrants that used to be located near the Dutch airport Schiphol. It wasn’t officially a ‘jail’, and the people who were detained there were not ‘criminals’, but there was something very dark about this place, to such extent that the authorities didn’t allow the journalists to come there.

However, Jan was not a ‘journalist’, he was an ‘artist’, and was let in. The result of his work was a detailed map of the place, made in his own style, with augmented layers of his personal impressions and (semi)factual data. 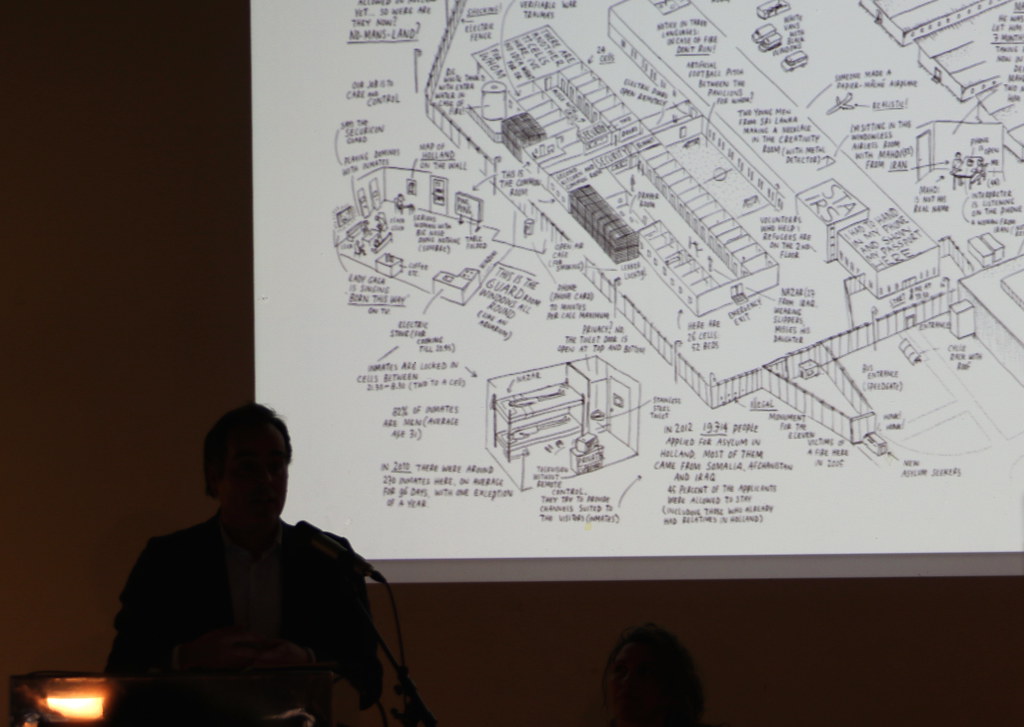 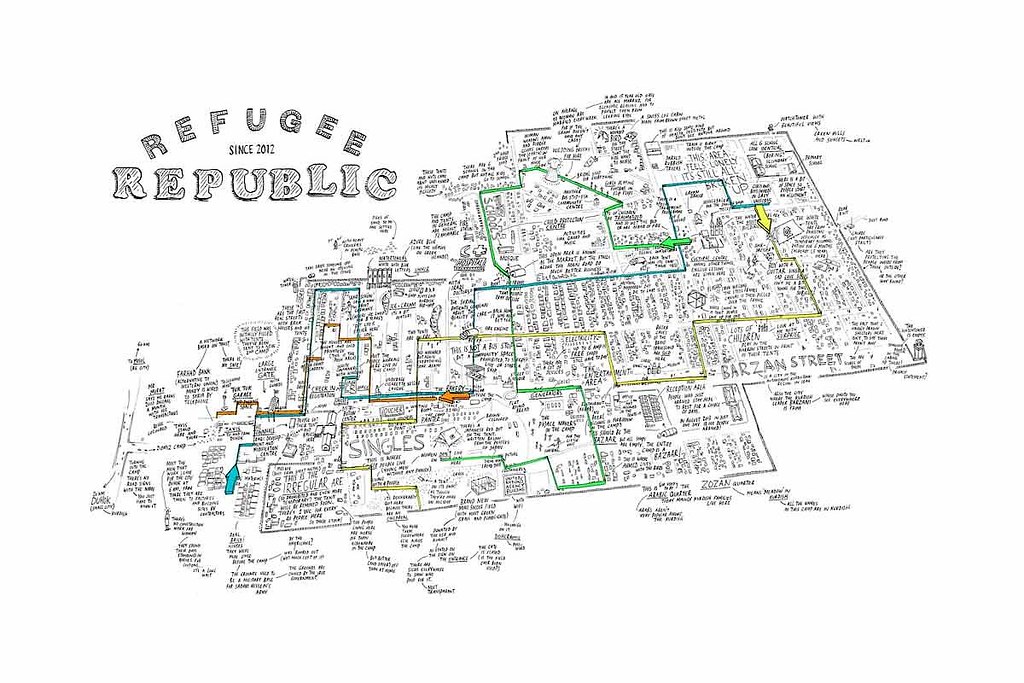 The project was commissioned by the influential Dutch newspaper De Volkskrant and took few years to complete (although I believe the projects of this kind never end, and Jan may go again to this camp of Syrian refugees at some point in the future.

The style of this map is very recognisable, very Rothuizen-esque; we again see a recreated mini-world, very detailed and densely populated, not unlike the paintings of Hieronymus Bosch. 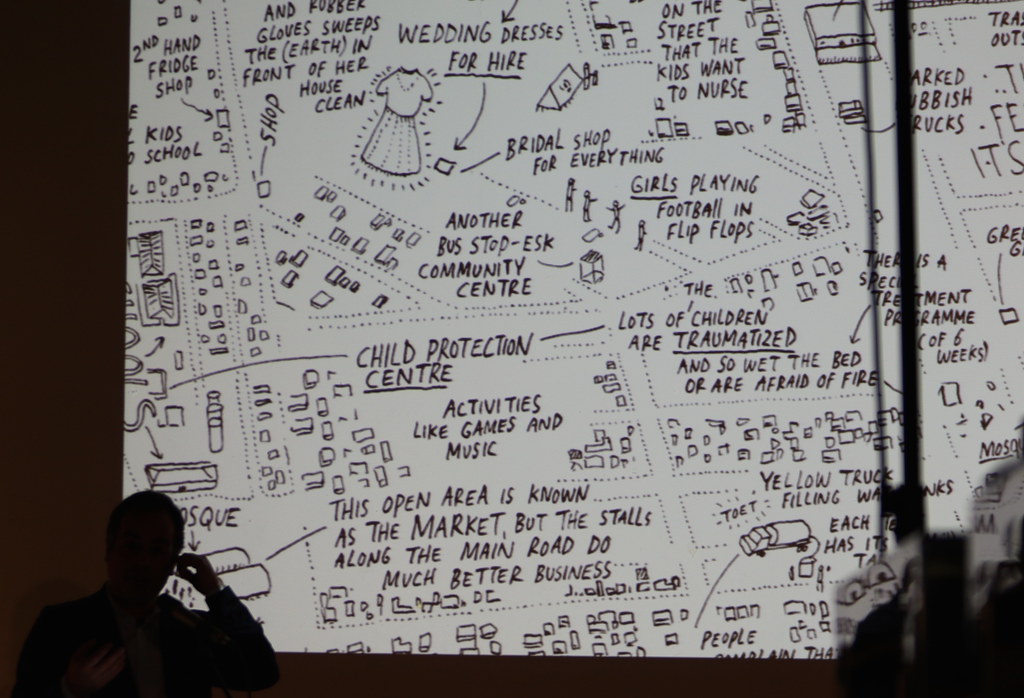 Unlike Bosch, however, these maps are also very talkative, in some other way you can also describe them as a writing spread over a flat surface.  How objective are these observations? Or how unbiased? Jan clearly states ‘I am not your researcher here, I am an artist, with my own subjective vision on the matters.’ 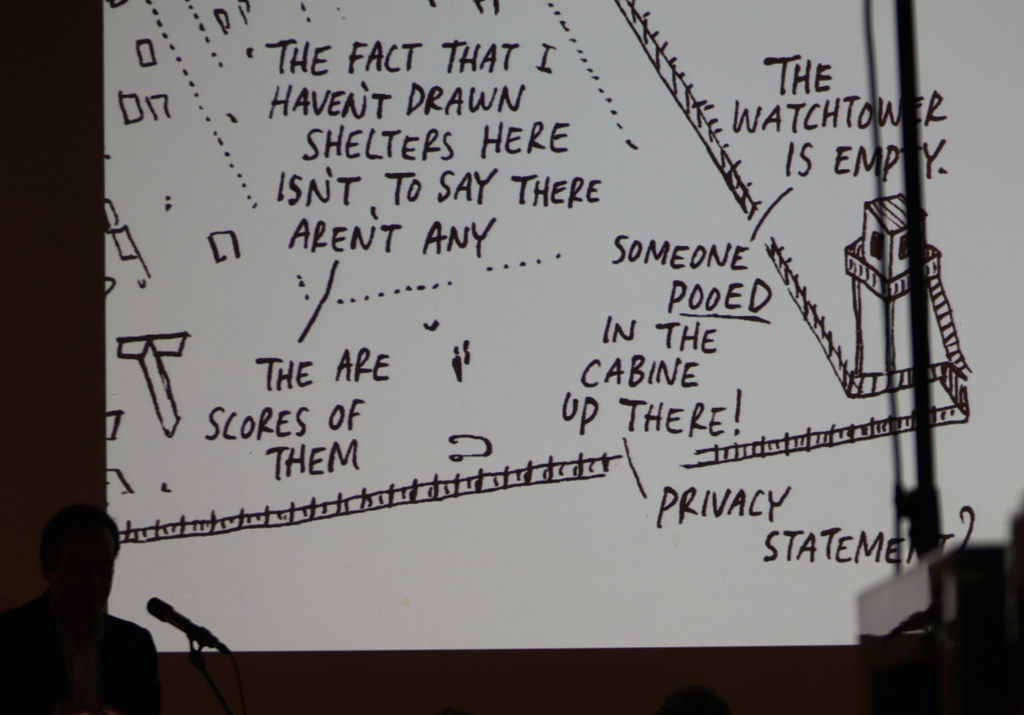 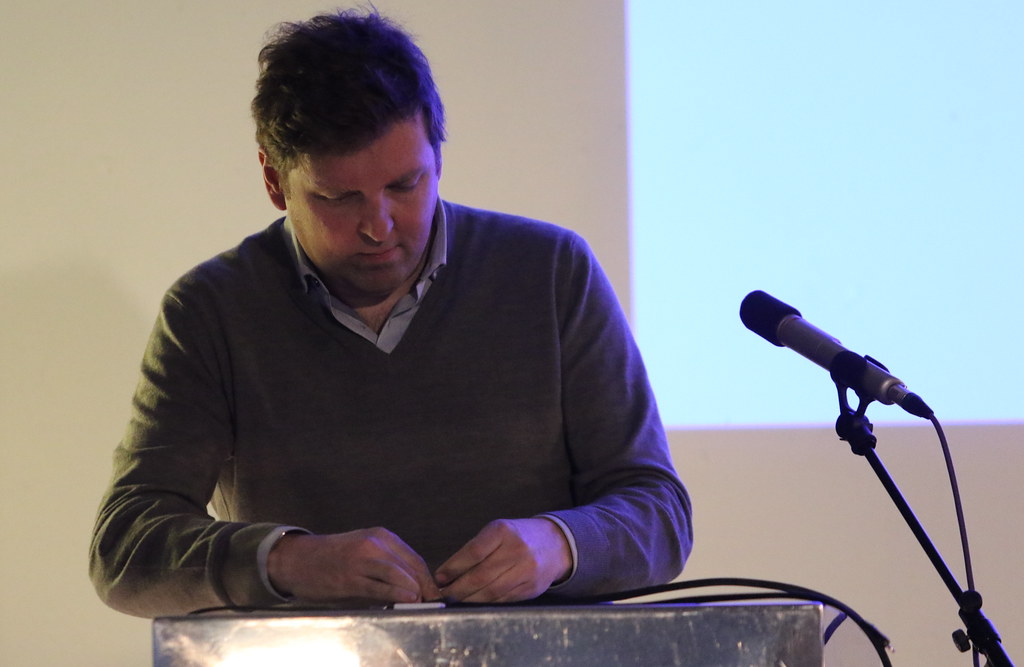 Jost took the data about the alleged losses incurred by the ISIS as a results of the actions of the US Army and allies in the Middle East (apparently these data are openly available through one of the web-sites of the US Army itself). But instead of presenting them in form of rational and cold (should I say ‘inhuman’?) infographics that dominates the media today, Joost and his team decided to depict all these destroyed vehicles, tracks, buildings (and people killed, too) using a very vintage style, that was used in, say, beginning of 20th century. The result is a A2 newspaper page: 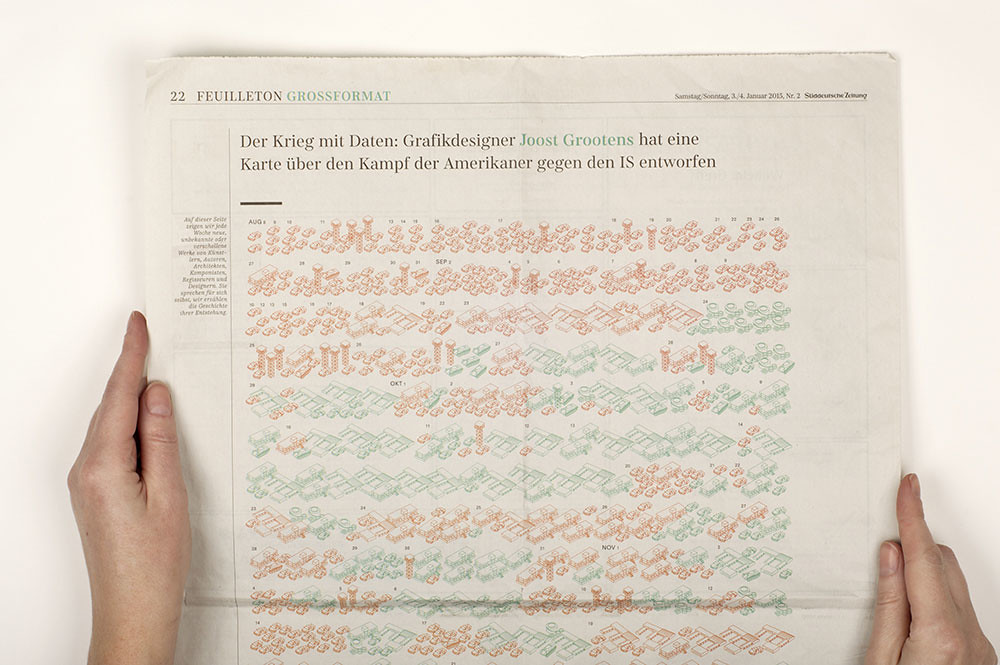 Why was it so original, I don’t know.

The last project was presented by Naomi Bueno de Mesquita, a researcher affiliated with the KU in Leuven. 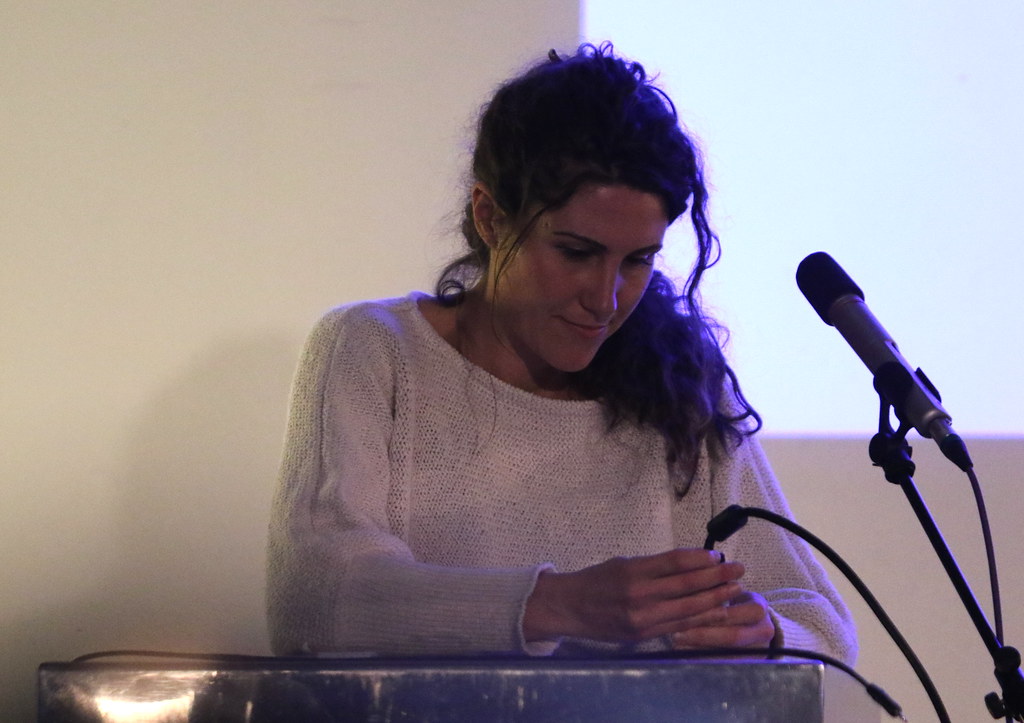 There is a fairly detailed description of this workshop aka performance she has organized last year ini Amsterdam – read more here: Mapping Invisibility : strategies of hiding in public spaces of Amsterdam

In a nutshell, it was an exercise of real-time tracking (and mapping) of the trajectories of the couples walking around Amsterdam: one of them an ‘illegal’ dweller of the city, and another is a pretty legal companion.

While walking, they had to record/report their experiences, along a certain themes (’emotions’), such as ‘stress’ or empowerment’. The results of these walk-throughs had been projected in real time on a large map, and discussed as they unfold during a public debates. In a way, this resembled the subjective maps by Jan Rothuizen, only drawn collectively, and with the use of more modern technology.

All four presentations were very interesting, individually and especially when compiled/collided together. What I was missing a bit is a ‘debate’ part. I tried to raise this issue in my last-second question, like How do all of them evaluate their work? or Why have they done their project in this way (as opposed to ‘that way’)? and most interestingly, Why have they been all very silent about these issues during their presentations. The answers were pretty jammed (partly because of the lack of time).

But it was a very useful session for me, and in many way has already triggered lots of discussions in our team. We do know lots of things about maps, of all sorts, yet we don’t use them very actively in our explorations and visualisations of the possible futures. Time to correct it! 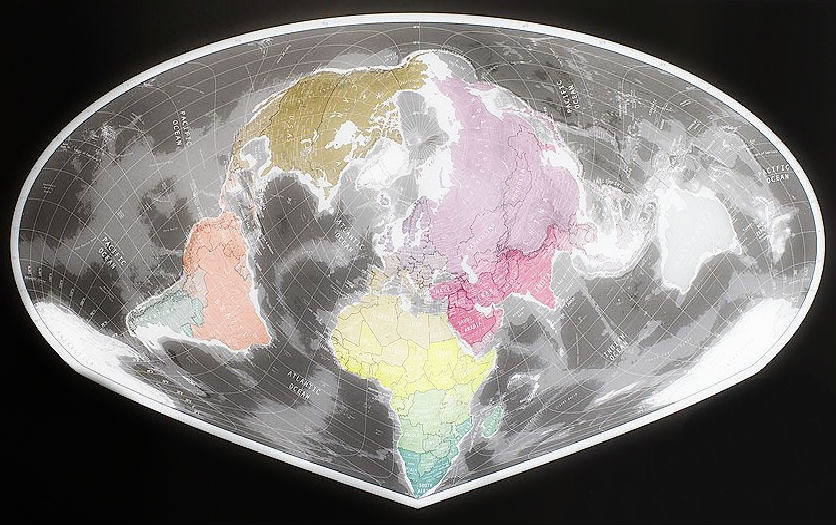 Like Loading...
This entry was posted in Uncategorized and tagged Design Academy Eindhoven, map. Bookmark the permalink.